What are the roles that artists and art workers play in the climate justice movements? For the first time in Estonia, Tallinn Art Hall presents artist Oliver Ressler’s remarkable recent body of work, Barricading the Ice Sheets (2019–2022), that sheds critical light on these movements in Europe and beyond. The exhibition is curated by Corina L. Apostol, who has worked together with the artist on previous projects related to environmental and political concerns.

A multimedia artist based in Vienna, Ressler has over the years sustained an artistic practice around this topic that brings together art and activism, placing emphasis on the climate breakdown that affects all areas of our lives as well as forms of collective resistance and presenting constructive alternatives for society. Ressler himself has insisted on the importance of artists and cultural practitioners being part of the “climate justice movement” as opposed to the “climate movement,” offering examples of deeper engagement between art and social movements. The title of the exhibition refers to the momentous tasks that the climate justice movement takes on and how it goes about to achieve its goals. As the artist remarks, the action of actually barricading the melting ice sheets is impossible in actuality. And yet in the face of this, the movement, deeply aware of the stakes of the interlacing threats to our planet, is nonetheless endeavoring to achieve what has never been done before. Can the seemingly impossible become achievable through collective action?

The exhibition in the Main Hall of the institution comprises a multi-channel video installation, photographic works, drawings, prints and sculptures that have never been seen in the Baltic countries before. The artist untangles through a non-neutral lens the complex connections between the environment, politics, economics and the potential for social change. He brings together activists of diverse backgrounds, whose positions are clearly communicated and documented, revealing for the first time how they organise and act in the struggle against climate breakdown fuelled by powerful capitalist entities. For his films, Ressler works directly with activists he knows or has encountered in his travels, establishing close collaborations with his subjects, who then become part of his documentary archive. Each work is tailored to the responses he collects through recorded material, making ideological positions, political choices and personal engagement visible.

Barricading the Ice Sheets aims to give an overview of the forms of mobilisations (activities, protests, gatherings, meetings) of worldwide actors for change. While drawing attention to the inadequacies of the global climate policy through key regional events, Ressler also self-reflects on his dual role as a participant in the movement and artist shaping its visual archive, blending together documentary and artistic concerns. His works are used by social movements and serve as artistic forms of awareness for an up-and-coming generation of citizens who are more involved in mass mobilisation, through which the artists seeks to break from the confines of the art world and address a larger audience.

After experiencing the exhibition, how may we as artists, citizens, activists, students, and community organizers  collectively re-think and develop radical, counter-hegemonic practices that help us re-imagine climate resilience and enable the creation of a new commons? It is significant that Ressler’s multi-year artistic research endeavour is presented in Tallinn and Estonia, a context that is also under threat from massive deforestation, looming sea-level rise, and aggressive gentrification driven by climate change. Although the Baltic countries have been presented in the media as “least affected” by climate disasters, recent mobilisations by young activists and students have emphasized the very real impacts of the rapidly changing environmental conditions and continued ecological devastation that profit-seeking companies have unleashed. In neighbouring Eastern European and Nordic countries, diminishing natural resources have similarly been singled out as prized resources to be further exploited in order to maximise private fortunes. Governments here too have failed to enact meaningful environmental protections, following a profit-driven logic that has been met with increasing local resistance by concerned citizens.

What does Ressler’s oeuvre bring to these local and regional challenges? What does it unearth regarding the possibilities of artists and art workers’ collective engagement in social movements? What does it tell us about the changing nature of art activism which in the face of enormous stakes for our planet can seem all but powerless? Art is never neutral, and has the capacity to change an environment as well as how we frame our existence and our actions. When artists works with activists, how does the process and the result sustain their ideas and political practices? In staging this exhibition at the Tallinn Art Hall, in a context that is visibly affected by climate change despite the myth of Estonia as a green forest nation, we invite audiences to visualise the subjectivities, struggles and truths of those engaged in social movements that bridge the barriers of geopolitical fragmentation. 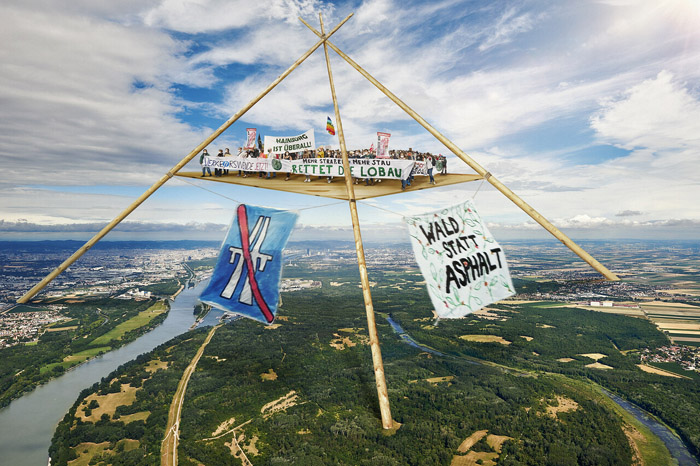