How can we as humans begin to comprehend the enormity of the cosmos in time as well as space? This perplexing question has driven our species to invent increasingly sophisticated technologies for seeing and charting the heavens, first from Earth and then more recently using probes sent out to explore and document the depths of space.

Cosmos Archaeology: Explorations in Time and Space unites data from the largest and most famous space exploration missions with lesser known but equally astounding endeavours to know all there is to know of our universe. Contributions from the forefront of the science include NASA’s Hubble and Webb space telescope images, datasets from the European Space Agency and the Square Kilometre Array Observatory and sounds from NASA’s Perseverance Mars rover. Individual pioneers in space are also celebrated, such as Swiss astronaut Claude Nicollier, alongside two heroes historically overlooked due their gender or colour: astrophysicist Jocelyn Bell and the first African American NASA trainee Edward Dwight.

At the core of the exhibition is a profound two-year research collaboration between EPFL’s Laboratory for Experimental Museology (eM+) and Laboratory of Astrophysics (LASTRO). Thanks to this project, Cosmos Archaeology confronts some of the most significant problems facing astrophysics today.

The capture of information about our universe ranges from radar pulses, an array of radio frequencies, spectral readings to conventional photography augmented with the world’s most high-powered lenses, mirrors, and telescopes. Because of this, astrophysicists face the impossibility of processing exabytes of data, much of it taking the form of numerical datasets. In parallel, astronomers have tended to utilize graphic illustration to represent the cosmos. The genre is familiar to us all, as it closely resembles science fiction or fantasy illustration. Though aesthetically seductive, illustrative approaches signal to the viewer that what they are observing is neither real nor based on true data. In recent decades, however, astrophysicists have sought to harness the power of immersive and interactive technologies for the visualization of real datasets.

In a perfect marriage of form and content, astrophysics laboratories around the world including EPFL’s LASTRO have begun to build a complete 3D model of the universe as well as the apparatus to explore it. The challenges of this endeavour go far beyond the apparent problem of constructing a virtual architecture that is complex and dynamic enough for the pluri-dimensionality and elasticity of spacetime, let alone at the scale of the universe.

The 19 installations that make up Cosmos Archaeology take up these innovations to dispel cliches of astro-illustration and the virtual “experience”—to open a portal for publics to directly access this dataset of the universe that astrophysicists can work with as well. Unique applications created for Cosmos Archaeology include a six-degree-of-freedom interface for visualizing Einstein’s gravitational lens effect on a cosmic plane. Another interactive installation propels us into a dynamic universe in which we can freely navigate a stunning 3D model of the cosmos situated in an immersive cave environment.

The global concern of space pollution is also foregrounded in Cosmos Archaeology. With millions of pieces of space junk clouding our view of the sky, the need to trace and visualize the presence and trajectory of fragments in orbit around the Earth is highlighted in three sound and image data visualization projects created by scientists and artists.

The exhibition features diverse works by several contemporary artists who have adopted astronomical data to explore the cosmos in their own way. Finally, echoing the steampunk aesthetic, Swiss kinetic artist Pascal Bettex has created a playful model of the universe using star mapping plates donated by the Sloan Digital Sky Survey. Cosmos Archaeology showcases the potential of art to transcend illustration and become an instrument of both knowledge and science. 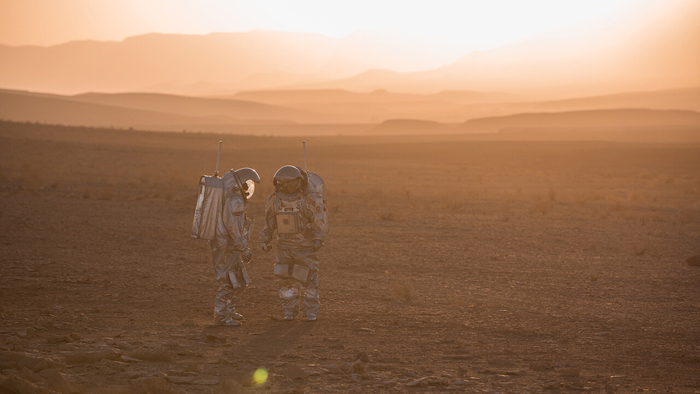