“I dreamt I awoke with one dead seeing eye and one living closed eye.”—Wilson Harris

Gods Moving in Places is a two-part exhibition exploring the political potential of the Caribbean and Guyanese imagination. It presents the memories, tales and histories that have shaped this imagination—ncluding indigenous mythologies and the violent conquest of the South American continent—hrough what Édouard Glissant calls the tropical night and its spirits and figures that weigh on the shoulders.

International Archives 1st half of 2022

Inspired by the collection of folk tales by the Guyanese writer Michel Lohier, the Met Bwa series of photographs by Mirtho Linguet gives form to fabulous and unsettling characters, mythical presences, “ruits of a tragic arrangement”[1] Borrowing the subversive power and the irony of the Guyanese carnival, Linguet’ photographs are both invocations and conjurations of forces, magical and beyond.

Many of these characters travelled from Western Africa to the Caribbean with the transatlantic slave trade—ike Anansi, the trickster often represented in the form of a spider, whose adventures were written down and illustrated by Pamela Colman-Smith at the end of the 19th century.

The relationship between humans and the natural environment they inhabit is addressed in images of Karl Joseph, who follows the spiritual forces in the Guyanese forest. His photographs of a tree located on the edge of Cayenne in French Guiana show the traces of interactions between a human community of adepts, the forest and the gods. The depicted tree becomes at once an altar, an intermediary between gods and humans and a gateway between different levels of reality.

Minia Biabiany’ sensual installation uses natural materials and techniques with symbolic and cultural meaning to investigate the relation of humans to their surroundings, in the process examining their connection to the colonial past and present of Guadeloupe.

For more than 20 years, Marcel Pinas’ work has been guided by the desire to preserve the culture and language of his community, the Ndyuka, a Maroon people. The Maroon Wars and maroonage were important milestones in the struggle against and resistance to slavery in the Caribbean and the Guiana Shield. After escaping the plantations to hide under cover of the forests, the Maroons waged war against French and Dutch enslavers in order to free the slaves, enabling the Saramaka, Aluku, Paramaka and Ndyuka nations to establish themselves permanently along the Maroni River. Pinas’ sculptures, installations and drawings convey this specific relationship to landscape, history, memory and language. The work presented in the exhibition specifically articulates this movement to preserve Afaka, a syllabic way of writing the Ndyuka language.

Gods Moving in Places is inspired by the writings of the Caribbean author Wilson Harris, who, based on an indigenous worldview, developed an understanding of the world in which nature, humanity, flora and fauna all become part of the same being. He proposes that everything is connected by a collective unconscious, which can be unlocked through our creative imagination. According to Harris, admitting different orders of reality allows us to transform ourselves and our position within the world, thus unleashing the political potential of the imagination.

[1] Fruits de l’rrangement tragique is the title of an exhibition by Mirtho Linguet at the Rencontres photographiques de Guyane, 2021 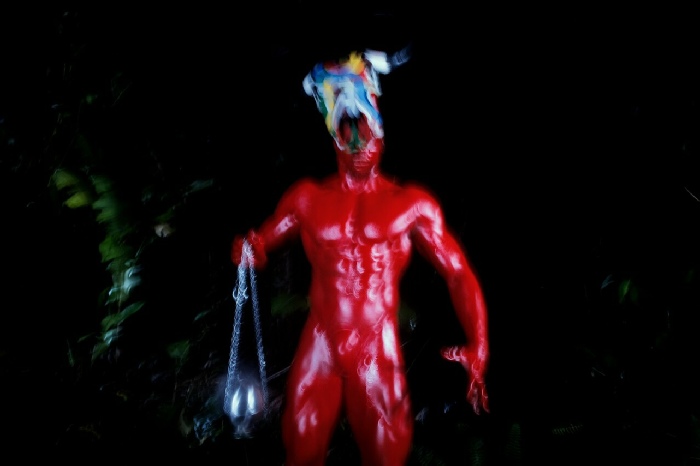