Recognised for her immersive multisensory installations straddling different media, with interwoven plots that combine fiction and reality, Laure Prouvost (France, 1978) tells extraordinary stories, seeking in her work a new audiovisual grammar based on a haptic and sensual approach.

Winner of the 2013 Turner Prize and selected to represent France at the 2019 Venice Biennale, Prouvost creates works in which the elasticity of language and narrative play a central role. Stepping away from traditional linear storylines, she often plays with deliberately poor translations and severs the commonplace and expected connections between language, image and perception, creating a space for humour and imagination that captivates audiences.

As she explains, “ords for me are visually powerful, because with words people create their own vision. I am just hinting and suggesting possibilities, the audience is making its own image in its head. It is also about misunderstanding, misinterpreting, miscommunicating—ords also suggesting failure and other senses.”

In a similar vein, Prouvost plays with the exhibition space. She creates a constant friction between what happens on and off screen, between the experience of what is represented and what is being experienced in the space, subverting established paradigms about information transmission through storytelling. Eluding conventional associative processes, this overarching playfulness multiplies the possible interpretations of each work. In a similar way to children’ games based on the free association of ideas and images, Prouvost restores and illuminates the magical properties of the everyday.

Curated by Joã Laia, In the Depth Heat Leaks currently on display at La Casa Encendida (Madrid) is Prouvost’ first solo show in Spain and maps a 12-year period in which she has produced five audiovisual installations. All the pieces are linked through a meticulous immersive intervention in four of La Casa Encendida’ exhibition spaces and feature a wide range of connected elements, such as found objects, painting, sound and sculpture, blended into multiple strata with marked performative slant.

The exhibition is made up of It, Heat, Hit; End Her Is Story; Lick In the Past; and Prouvost’ two most recent works: the installation From the Depth, which includes the film Four For See Beauties, co-produced by the Museum of Contemporary Art Kiasma | Finnish National Gallery and La Casa Encendida; and Surrounding You, produced by carlier | gebauer. 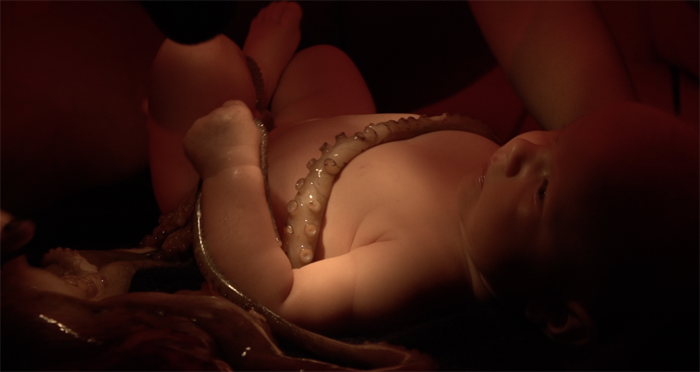