The outcome of photographic expeditions in Brazilian Amazonia carried out from the late 1990s onward, but mostly between the years 2013 and 2019, the exhibition Amazôia, by Sebastiã Salgado, is arriving at Sesc Pompeia, in Sã Paulo, Brazil, in the month of February. The show was inaugurated in May 2021 at the Music Museum of the Paris Philharmonic (France), and is currently being held at MAXXI Museum, in Rome (Italy) and at the Science Museum, London (England). Besides the more than 200 photographs that portray teeming landscapes and the life of indigenous communities, the show features seven original video statements by indigenous leaders about the problems they face for their survival in the forest while warning about the urgency of actions to ensure its protection and preservation. The exhibition presents portrayals of 12 indigenous groups: the Asháninka, Awá-Guajá, Korubo, Macuxi, Marubo, Suruwahá Yanomami, Yawanawá Zo’é and the Xingu grouping, which includes the Waurá, Kuikuro and Kamayurá.

Amazônia is the most recent photographic project by the award-winning Brazilian artist, recognized worldwide for his black-and-white images that establish a dialogue between nature and the human, published in books such as Other Americas (1986), Workers (1993), Exodos (2000) and Genesis (2013). The show, conceived by curator and scenographer Léia Wanick Salgado, offers an immersion into the forest based on large-format images surrounding spaces conceived like indigenous ocas. Her idea was to also create an interaction with the Amazonian soundscape through a work composed especially for the exhibition by French musician Jean-Michel Jarre, based on sounds originating from the tropical forest, such as the rustling of trees, birdsongs, the cries of animals and the roaring of waters. There are also two spaces with photographic projections, one of which shows forest landscapes set to music by the symphonic poem “rosã (Origem do Rio Amazonas),”by Brazilian composer Heitor Villa-Lobos (1887–959). The other features portraits of indigenous people, with an original composition by musician Rodolfo Stroeter.

From a local viewpoint, in Brazil we are currently witnessing a series of threats to the indigenous peoples coupled with the annulment of environmental protection initiatives and the deployment of policies that encourage the unrestricted exploitation of the subsoil and the occupation of land—reviously protected—y agricultural and livestock raising activities of massive environmental impact. In this context, the exhibition Amazônia is presented as a warning shout and a way of contributing to the debate on the future of one of the most threatened regions of the planet, a discussion that must be made in a broad perspective and with the participation of the inhabitants of the forest. Salgado is a member of the Observatório do Meio Ambiente [Environmental Observatory] linked to the Brazilian Judiciary Power and has been working since 2019, together with Lélia, on a broad front of mobilization and activism together with the Brazilian and foreign authorities to raise awareness about the region and boost its visibility in Brazil and worldwide. 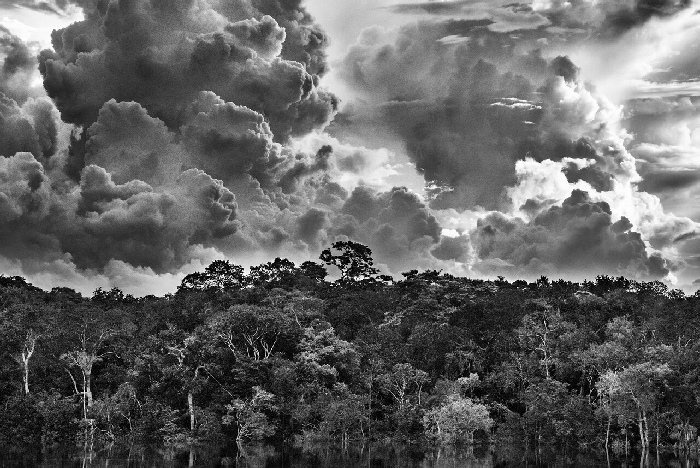