Sheila Hicks’s inventiveness is boundless. The artist, who has lived in Paris since 1964, plays with natural materials in breathtaking colors. She continually knots, weaves, and spins new forms out of wool, linen, and silk. On the one hand, the artist was influenced by modernism, having studied painting under the Bauhaus master Josef Albers at Yale University. On the other hand, she is influenced by the traditional crafts of different continents, which she learned about while traveling and during extended stays in Chile, Mexico, India, and Morocco, among other places.

Sheila Hicks, a little bit of a lot of things

The exhibition a little bit of a lot of things includes works that span a period of more than fifty years. It looks back on an extensive, fascinating work and also features recent works by Hicks, whose creative power remains undiminished to this day.

Large-scale works alternate with small weavings, which the artist continually works on from time to time, like drawings. Hicks has repeatedly invented artistic manipulations in order to articulate new forms out of textile materials, such as weaving interspersed with found objects from nature, scepters wrapped with colored wool, and accumulations of threads tied into ropes as thick as an arm.

The architecture of the LOK is ideally suited to Sheila Hicks’s sense of space: two monumental textile columns extend up to the ceiling of this industrial building, which once housed locomotives, as if they were supporting the fragile roof. A heap of colorful wool nets forms a soft sculpture with painterly qualities. Hicks’s textile interventions fundamentally change the space. Dimensions are put into perspective, and the artist intervenes on a scale that makes the human body seem insignificant.

In addition to the textile materials, which exude a strong presence, Hicks’s saturated and extroverted color palette is also worth noting. It recalls the indigenous textile crafts of South America and India. Hicks thus mediates between different cultures and continents, as well as between different traditions, such as painting and textile art, creating a unique artistic vision.

Sheila Hicks’s works have been exhibited internationally in solo and group exhibitions. She participated in the Venice Biennale in 2017, the Whitney Biennial in New York in 2014, and the Bienal de São Paulo in 2012. Her most recent solo exhibitions include Lignes de Vie at the Center Pompidou in Paris, Free Threads at the Museo Amparo in Mexico, and Pêcher dans la Rivière at the Alison Jacques Gallery in London. 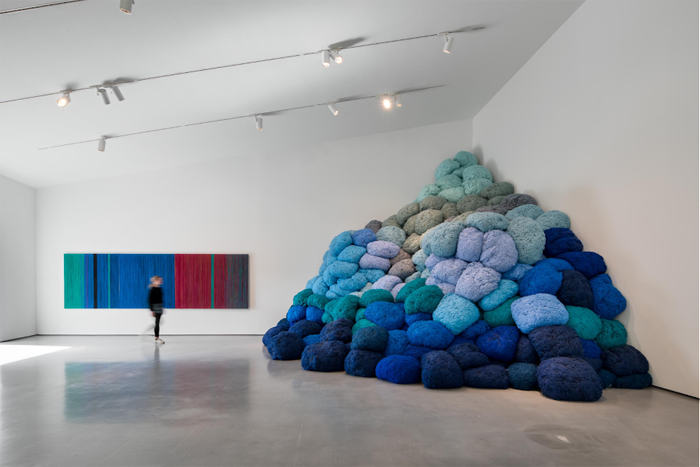