Berlin’s Humboldt University is breaking barriers and expanding the frontiers of science. The newly opened Humboldt Lab punctuates its intersection into society. Inside Outside—Petra Blaisse, in collaboration with Cookies and schnellebuntebilder, designed a contemporary Wunderkammer indebted to the impressive cosmos of academia brought forward ever since the founding of the Humboldt University in 1810.

The focus is far from filing scientific achievements in a trophy cabinet. Humboldt Lab houses curiosities that are actively studied as much as showcased. Inside Outside created a sequence of architectural moments to trigger eager expectation proportional to being on the brink of a discovery. Transcribing dramatic reveal into architecture, the exhibition trails a large staircase, a gallery, a stage and, finally, uncovers the Humboldt Lab as the Backstage of Science.

A vivid, ever-changing media visualization projected onto a circular and translucent curtain lures visitors into the foyer. Here, the wrecking impact of humans on vulnerable ecologies is represented through an animated installation of shoals of fish that shudder at the sudden movement of overstepping visitors.

The Main Hall is the knowledge-productive counterpart to the Foyer’s spectacular installation. The collection of 300 scientific objects exhibited here rarely functions as traditional museum highlights. Their meaning is bred by context, spawned by the creative combination or collision with other objects. As a collective, the objects warrant reading into a potentially surprising narrative that diversifies scientific thinking.

A steel grid hung underneath the ceiling facilitates a motorized pantograph system designed in collaboration with Cookies. The pantograph system, taken from the television industry, allows for 38 research objects to be brought at eye-level, to the taste of the investigative visitor. The inherent versatility of the presentation establishes a non-hierarchical composition of exhibiting the objects at hand. From above or below, every view matters as much as the singular museum view. This contemporary Wunderkammer makes mystery ally to display, as every object is stored in mobile cabinets along the walls or attached to the ceiling—sometimes within reach, other times unreachable.

The Main Hall also provides access to four archives that underscore diversity within their scientific disciplines, while engaging notions of collectivity and cross-referencing. In a series of rooms that alternate between letting in daylight and creating darker spaces of concentration, visitors have access to the Sound Archive, the ethnographic Hahne Niehoff Archive, the Prisoners of War collection and the Jahn Archive. The latter offers insight into recordings and writings that worked to decolonize African identity and the narratives that hold historically exclusionary structures in place.

An interactive media screen that consists of 24 adaptive projections runs along the Main Hall’s wall. Designed by schnellebuntebilder and Jan Bernstein, it presents a visualization of pressing issues of our time, from man-made violence to the changing climate of the Anthropocene. Films, pictures, interviews, texts and statistics are laid out in an innovative and participatory fashion. The kinetic installation reacts to and is influenced by any movement of the visitors.

Beyond passive display, all showcases are carefully climatized, detailed and locally lit to fit the objects according to museum standards. The various heights and forms of each display invite visitors to engage visually, physically and emotionally. Color and graphic additions are strategically positioned to enhance the value of individual objects. The graphic layer was designed by Julia Neller in collaboration with Inside Outside and the curatorial team. It was implemented since the early design stages, in the spirit of reinforcing the diversity and non-hierarchical object presentation. Four different thematic texts accompany each piece, to establish a multi-perspective curatorial practice. The new Humboldt Lab is conceived as a radical, constantly changing exhibition that fulfills an allegiance to the open, inquisitive mind. 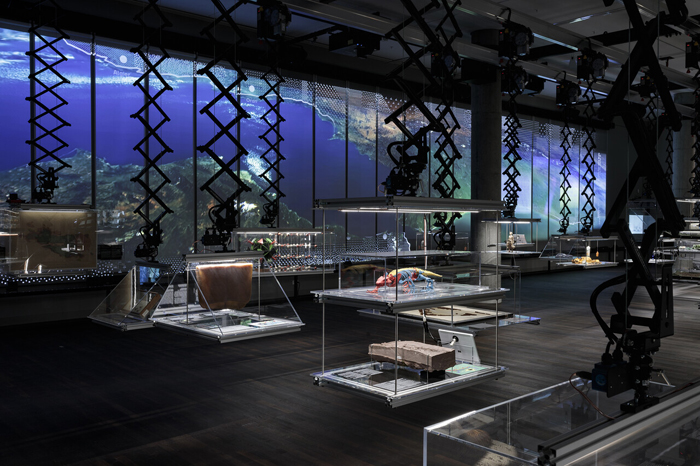