One of the most famous places in Barcelona is for the first time open to the general public the 20 May 2022. The Glòries Tower has existed since 2005, but has never been opened to the public. It is the work of the French architect Jean Nouvel.
Before entering the mirador, several exhibitions are offered on the first floor of the basement. Combining art, science and technology, the visit is based on the overall theme of a futuristic, greener and more sustainable Barcelona.
After an explanatory prologue on the city and its many changes, the Barcelonians exhibition, curated by Joan Sallas, features 132 folded paper sculptures. Origami that represent all the animal and plant species living in Barcelona, ​​from palm trees to insects. The second installation, titled Atmosferes, spans a 108m² screen for an immersive light show. For 7 minutes, all the atmospheres of Barcelona are therefore presented, the sky, the sea, the wind and the sounds, each based on scientific data. Two other exhibitions, on the rhythms and sounds of the Catalan capital, are also offered before accessing the elevator that leads to the mirador.

Cloud Cities Barcelona, by artist Tomás Saraceno, invites participants into a space of communal encounter, discourse and critical speculation. Housed in the 360° observation deck of Mirador Torre Glòries, it is Saraceno’s first permanent interactive sculpture in southern Europe. The artwork occupies an area of 130 m³ and is composed of 113 cloud spaces, like droplets of water condensing along the strands of a three-dimensional spider’s web, made of 5000 nodes connecting 6 km of tensile cables. Moving through the air at a height of between 4 and 10 m above the floor or becoming enveloped by the atmosphere of the cupola’s apex, participants can open themselves to a novel sensory experience that converts this observatory into a suspended realm from where they look inwards and outwards, gather and dialogue, immersed in the multiplicity of worlds made manifest in the changing shapes of passing clouds. Wandering along the paths of varying levels of complexity, participants can pause to find a selection of books, an invitation to inhabit shared time and consider alternative constellations of the urban public sphere, speculative architectures, the environmental crisis and the entangled web of life.

For more than two decades, Saraceno has been imagining and activating a world free from fossil fuels, in collaboration with spiders and their webs, situated forms of knowledge and with the vibrant superorganism that is the cosmic web, building an artistic practice of unprecedented variety and scale. Informed by the ground-breaking long-term research and curiosity of the international and interdisciplinary Aerocene and Arachnophilia communities, founded by Saraceno, Cloud Cities Barcelona invites participants into a porous cloudscape of tensions in suspension, to engage in collective critical reflections, activate zones of emergence and reconsider worldwide networks of care.

In the midst of the climate emergency, war, global pandemics, racial-ecocidal capitalism, social exclusion and the proliferation of clouds of pollution and misinformation, Saraceno’s work addresses matters of environmental and social justice and envisions alternative ways of engaging with Earth’s atmosphere and interspecies ecology. Emerging from his long-standing artistic research Cloud Cities, a proposal for a common imaginary for an ethical re-alliance with the environment, the planet and the cosmic web beyond anthropocentrism, his cloud-shaped sculptures, reminiscent of the geometric Weaire-Phelan structure of foam and soap bubbles, act as an invitation to engage from diverse bearings, where there is neither up nor down, no inside or outside and all is floating. As part of this series, Cloud Cities Barcelona challenges the verticality of the observatory’s distant gaze through alternative geometries of togetherness, so as to suspend social distances and collectively consider the multi-scalar threads of relation that weave our shared but threatened world and bind our interdependent fates. 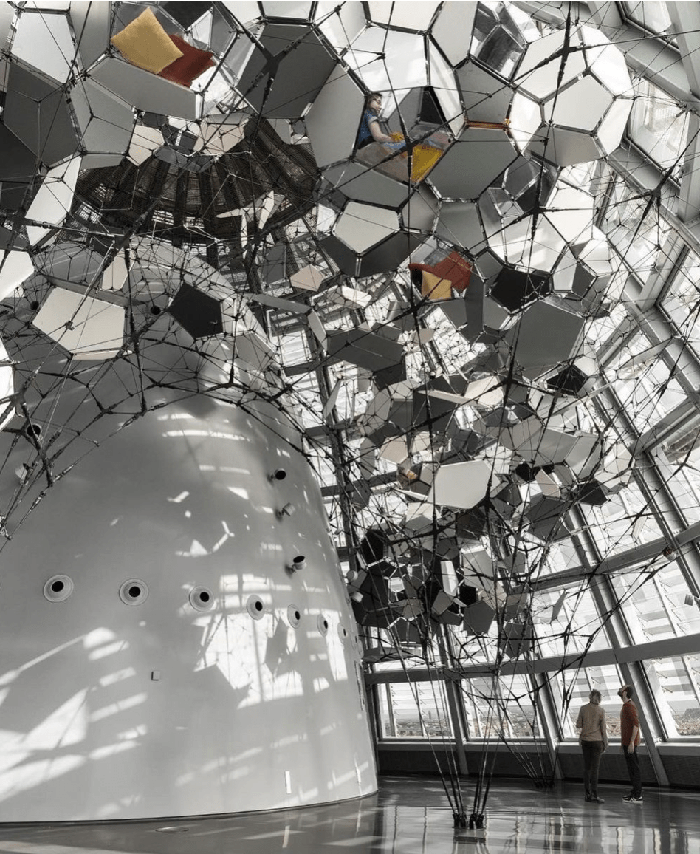