A shimmering soap bubble floats high in the air. A young boy draws the string on a bow. His back straightens and his eyes close just before an arrow with a rubber stopper flies. The surface of a black pond reflects an image of a raft with a sleeping girl on it, as if floating in a dream. What kind of world unfolds beneath her closed eyes?

All the different shades of the world have condensed into grey. The nocturnal landscape simultaneously combines the familiar and the unknown—and on the other hand time, and timelessness.

These mystical figures and frozen moments are part of the world created by Belgian artist Hans Op de Beeck (b. 1969) at Amos Rex. The Quiet Parade is a sculptural mindscape that includes works from 2015–2022 as well as a soundscape composed for the exhibition. The artist invites us to wander in an enigmatic park.

Op de Beeck’s art depicts life, its transience and beauty, and its tragicomedy. The artist, who moves fluidly between various media, says that he navigates somewhere between baroque and minimalist language, spiced with supermarket kitsch aesthetics. The artist’s sculptures are linked to the classical sculpture tradition and consists of echoes from the real world. They do not depict reality, but rather they are interpretations of it.

Proportional play and allusions to art history are part of the artist’s oeuvre. Danse Macabre, a work in the centre of the exhibition, refers to the “dance of death” motif, a familiar metaphor for the universality of death seen in Late Medieval ecclesiastical art. The startling figures on the carousel remind us of the bittersweet parade of life and death. Time and memento mori (“remember that you [have to] die”) also serve as essential themes in works depicting an oversized piece of cake and still lifes, in which the artist stretches familiar proportions and hence sprains the spatial and bodily experience of the viewer. The works are like scenes from the reality, yet full of surreal possibilities of a dream world where even a tiny blackberry can swell into a giant one.

The soft gradient between illusion and truth is highlighted in the video Staging Silence (3), in which the artist plays with the power of visual illusion. Landscapes are transformed before the viewer’s eyes, as pairs of hands reach in from the edges of the image, intervening with the narrative in a surreal manner. The hands repeatedly build and dismantle the scene, as one landscape flows into another in time with a musical score. The work embodies the artist’s attempt to create so-called visual fiction that offers moments of wonder and silence.

Op de Beeck lives and works in Brussels. His works have been widely exhibited in solo and group exhibitions around the world—and now for the first time in Finland. 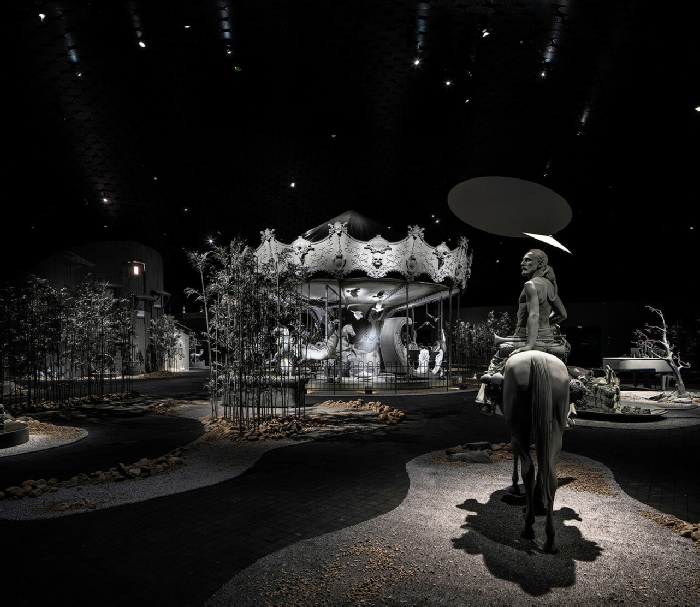