What do plants mean to human beings? The exhibition Green Modernism: The New View of Plants takes us back to the early 20th century and examines the depiction of plants in the visual arts and how they were viewed in botany and society in general. After all, as plain as potted plants in pictures may appear at first glance, and as matter-of-fact as botanical reports read, they always also attest to the contradictions, fears, longings, and ideologies of the modern age.

The Plant as the other

At the beginning of the 20th century cactuses were “unted”in the Americas in order to be grown and sold on the German market. In this respect, indoor gardens, which were cultivated, sung about, photographed, and painted, were colonial gardens. Those who wanted to be modern filled their homes with cactuses, rubber trees, and other plants that grew outdoors only in warmer climates. Aenne Biermann photographed her own collection of cactuses and the art historian Rosa Schapire had Karl Schmidt-Rottluff design a “actus home”for her.

The plant as form and color

The photographer Karl Blossfeldt was not interested in the names and functions of plants. What intrigued him was their form, which he revealed by pruning the plants he photographed—ften to the point of nonrecognition so they could be used by artisans as reference material for their designs. Others, like the artist Karl Schmidt-Rottluff, used flowers, including the poisonous larkspur, to add an accent of color to a painting.

The plant as relative

The philosopher Walter Benjamin was not the only one who was fascinated by photographs of plants under the microscope and time-lapse recordings. Cinemas were packed with audiences for the film Das Blumenwunder, which presented plants in a completely new way. The boundaries between lifeforms had become more fluid, so it is not surprising that horror fantasies about plants can also be found in film and literature of the Weimar Republic, such as carnivorous plants.

Green Modernism: The New View of Plants is a pilot project in eco-curating for the Museum Ludwig. Yilmaz Dziewior, director of the Museum Ludwig: “ am very delighted that with Green Modernism we are able to make visible some aspects for the first time, how we as an institution, as a team, deal with sustainability. In order to be more transparent and to get into exchanges with our visitors, we are going more into detail about what sustainable possibilities we are trying out and how we produce the exhibition.”This marks the continuation of the transformation initiated by the museum’ sustainability team, whose goals can be found in the sustainability report of the Deutscher Nachhaltigkeits Kodex (DNK).

The Museum Ludwig is able to conserve resources and emit less CO2 by working with its own collection, since this requires less shipping and packing of artworks. And yet, Green Modernism won’ do without pictures from outside of the museum's own collection—ust without original works. The catalogue will be published online only at green-modernism.de, in a climate-neutral manner and free of charge. Exhibition architecture from previous exhibitions will be reused or recycled by the museum’ in-house carpenters.

Claudia Roth, Commissioner to the Federal Government for Culture and Media, is acting as patron of the exhibition.

The exhibition is sponsored by the Freunde des Wallraf-Richartz-Museum und des Museum Ludwig e.V., the Ministry of Culture and Science of the State of North Rhine-Westphalia, the Peter and Irene Ludwig Foundation, the Karin and Uwe Hollweg Foundation, the Landschaftsverband Rheinland (LVR), and Sparkasse KölnBonn. 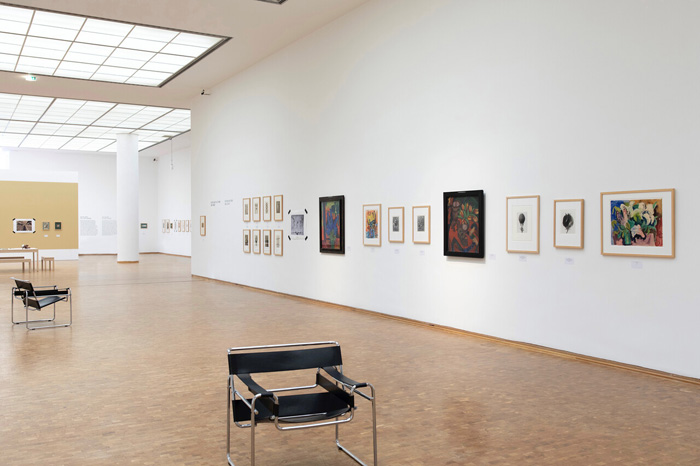