Fogo Island Arts (FIA) announced a new weather station on Fogo Island by artist Liam Gillick as part of the World Weather Network (WWN), a ground-breaking constellation of “weather stations” located across the world in oceans, deserts, mountains, farmland, rainforests, observatories, lighthouses and cities. WWN is comprised of artists and writers from twenty-eight arts organizations from across the world.

Liam Gillick’s A Variability Quantifier (The Fogo Island Red Weather Station), 2022 is an artwork intended to function as an operational weather station for Fogo Island. It gathers local weather data and is a place for education, reflection, and discussion. The site and work are open and people are encouraged to visit the weather station.

This work is being acquired by the National Gallery of Canada as part of its National Outreach initiative generously supported by Michael Nesbitt, in which artworks from the collection are sited and maintained at localities across the country. The work will be displayed on the island through October 2026, with stewards throughout this period generously supported by Steven & Lynda Latner.

“Fogo Island has a front-row seat on the Labrador Current for observing changes to events such as the annual passage of icebergs in ‘Iceberg Alley,’” said Nicolaus Schafhausen, Fogo Island Arts. “With approximately 40% of the world’s population living in coastal communities, monitoring the changing weather in these communities is becoming increasingly critical.” Claire Shea, Fogo Island Arts, added “It also could function as a site for school visits to further the understanding of the role that scientific modelling and data gathering play in relation to climate.”

“Art has always been used to understand and elevate our environment. This project brings together so many new perspectives that will accelerate critical thinking about our current crisis. I am interested in the science of the climate crisis. My project is to collect data to feed into the global system. I always want to accentuate the clear maths and science that have long proved the catastrophic changes that we all face,” said Liam Gillick

“My father used to say in the seventies that the winters were changing. He used to say winter would come and stay all winter, now, one day it’s -20 and the next day it’s +10,” said Fogo Island resident, Norm Foley.

“We are excited to collaborate with Liam Gillick and Fogo Island Arts on this innovative program,” said Josée Drouin-Brisebois, Senior Manager National Outreach, National Gallery of Canada. “As the first of a series of National Outreach activities, this project supports ways in which art can be used to educate, engage and inform. The local connections developed through initiatives like this are invaluable to the mandate of the Gallery.”

Offering different ways of looking at, listening to, and living with the weather, writers and artists’ weather reports will be shared on the World Weather Network platform from each location: the Himalayas, the Mesopotamian Marshes in Iraq and the desert of the Arabian peninsula; the Great Salt Lake in Utah and the “Great Ocean of Kiwa” in the South Pacific; “Iceberg Alley” off the coast of Newfoundland, the waters of the Baltic Sea and the Arctic Circle; a tropical rainforest in Guyana and farmland in Ijebu in Nigeria. Artists and writers are working in observatories in Kanagawa in Japan and Manila in the Philippines; looking at cloud data in China and lichens in France; lighthouses on the coast of Peru, the Basque Country and the Snaefellsness Peninsula in Iceland; and cities including Dhaka, Istanbul, Johannesburg, London and Seoul.

A Variability Quantifier (The Fogo Island Red Weather Station), 2022 is curated by Claire Shea and Nicolaus Schafhausen of Fogo Island Arts in collaboration with Josée Drouin-Brisebois of the National Gallery of Canada. 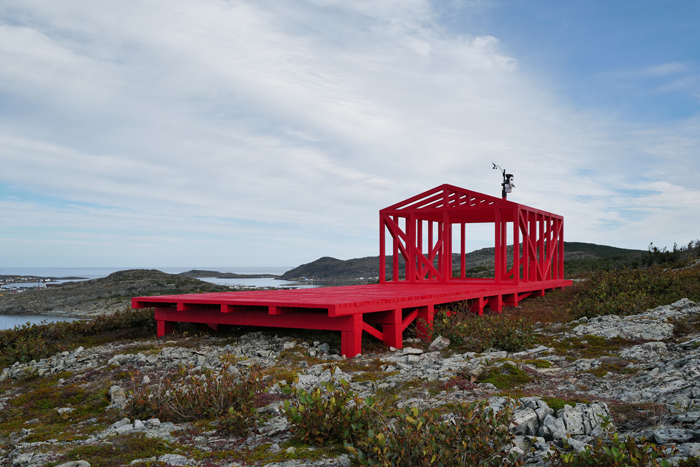